If you are into the history of science I highly recommend buying or renting the James Burke series Connections. 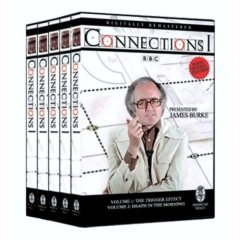 James Burke always does an awesome job of letting you see the big picture of science.

This blog post mentions 2% of company to the entire advisory board, 0.25% of company per adviser.

Michael and I had been interviewed earlier this year by Ron of Python411, this is a technical interview talking about the technologies we are using:

I was on NPR Marketplace radio in April of 09, interviewed by Mitchell Hartman talking about some of the ideas we are working on.

The radio piece goes into detail about where venture capital investors are investing and the healthcare industry.

Click here to get more details on this radio piece.

DrChrono.com was featured in an online article for Inc. magazine. Read the full article on their website:
http://inc.com/news/articles/2009/03/layoff.html

I had the great honor of being interviewed by CNBC’s Erin Burnett along with Carl Schramm, CEO of the Kauffman Foundation. You can see the segment below where Carl gives his insights on how entrepreneurship drives the creation of new jobs and economic growth. I talked about DrChrono.com

If you can’t view the MSNBC video, here is another format of the same video:

Daniel and I both had the chance to speak with Carl Schramm after the interview and he is really an old school tough as nails entrepreneur who has founded four companies during his career. He gave us some great advice while standing outside the New York Stock Exchange after the interview. Carl was an awesome guy to meet and get a chance to talk to. I’ll definitely write more about Carl’s advice for us and all entrepreneurs in a future post.
The response from even this brief airtime on CNBC has been great. We’ve already gotten lots of new traffic from the exposure and a ton of new users signed up for free accounts at DrChrono.com.

Below are some additional pictures from the chapter meetup. John Phelan from Zweena Health was a speaker at the meetup. Mark Hurst from Gel was at the meetup, he is the organizer of the Gel Health Conference.